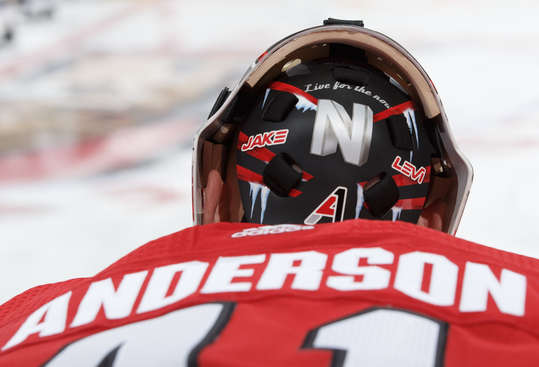 OTTAWA — Craig Anderson made 36 saves for the Ottawa Senators in a 5-1 win against the Los Angeles Kings at Canadian Tire Centre on Saturday.

Chris Wideman had two goals; Colin White, Mark Stone and Chris Tierney scored; and Matt Duchene and Brady Tkachuk each had two assists for the Senators (2-2-1), who lost their past two games.

“I felt I was patient, square to the puck, let the puck come to me, let the play happen, wasn’t overly aggressive,” Anderson said. “Guys did a great job in front as far as boxing out, picking up sticks, picking up second and third chances.”

Trevor Lewis scored for Los Angeles (2-2-1). Jack Campbell, who made 40 saves in a 3-0 shutout against the Montreal Canadiens on Thursday, was pulled in the second period after allowing four goals on 11 shots.

“We’ve got to do a better job getting prepared for a game,” Kings defenseman Jake Muzzin said. “[Campbell] has been good for us all year and we’ve got to be better for him.”

Tierney gave the Senators a 1-0 lead when he redirected a shot from Dylan DeMelo at 6:29 of the first period.

Wideman backhanded a rebound to make it 2-0 at 11:50 of the first period. Los Angeles challenged for goaltender interference, but the goal was upheld after video review.

“I didn’t know if I’d ever score again, honestly, the way that the season’s kind of started for me,” Wideman said. “[I’m] just happy that it went in.”

Ottawa extended its lead to 3-0 at 16:19 when Stone backhanded a loose puck off the post on a power play.

White beat Campbell with a wrist shot from the right faceoff circle to make it 4-0 at 10:01 of the second period. Peter Budaj replaced Campbell after the goal and made 10 saves.

“Too many 1-on-1 battles being lost that end up around our net which led to a good amount of easy goals,” Kings coach John Stevens said.

Wideman scored his second of the game to make it 5-1 at 11:03 of the third period. It was his first two-goal game in the NHL.

“This is a fun group to work with,” Senators coach Guy Boucher said. “I’ve seen it every day. The guys are really jelling together. Our motto was transitioning together this year; on ice and off ice. And they’ve displayed that and it’s really nice to see.”

They said it
“Bad start. They capitalized on some opportunities. We put some pressure on them later, but it was too late, so we lose.” — Kings defenseman Jake Muzzin

“Around the League, [scoring] has been up. I look at the scoreboard today and the scores are down. Teams are starting to figure out their systems and kind of settling in. It’s just the way the games kind of go at the start of the year; you just take them as they come.” — Senators goaltender Craig Anderson

Need to know
The Kings were 0-for-5 on the power play; they are 0-for-18 this season. … Senators defenseman Thomas Chabot extended his point streak to five games with two assists; he has eight points (two goals, six assists).