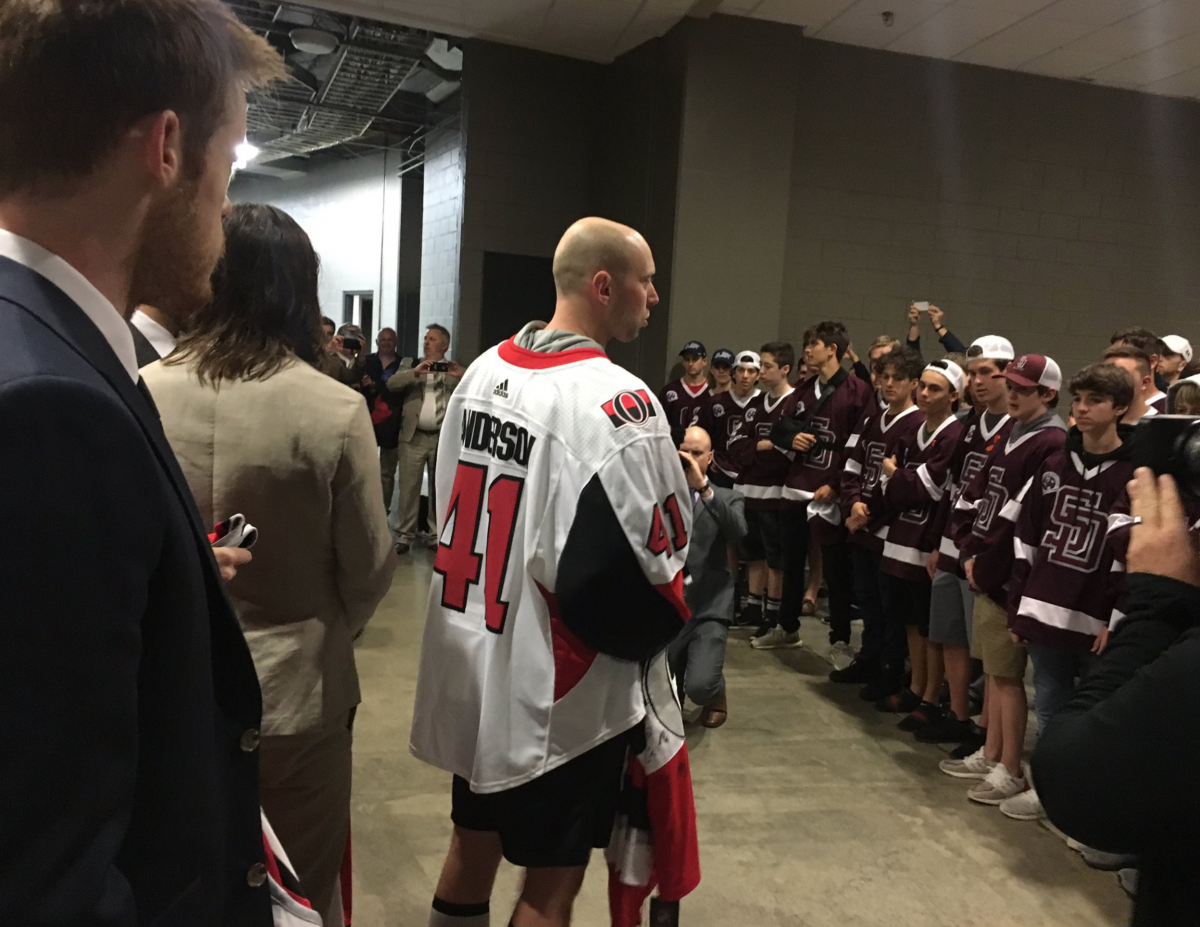 SUNRISE, Fla. — The Florida Panthers had their record eight-game home winning streak end with a 5-3 loss against the Ottawa Senators at BB&T Center on Monday.

“I thought we had enough chances to win the game,” Panthers coach Bob Boughner said. “But you’ve got to give them credit. They battled hard. It was one of those nights where no matter what we did, it seemed like we weren’t destined to win this game.”

Matt Duchene and Magnus Paajarvi each scored twice, Erik Karlsson had two assists, and Craig Anderson made 35 saves for the Senators (24-33-11), who had lost two straight.

“I think getting the big W tonight was huge for us and for our confidence,” Anderson said. “We came out and had a great first period. We knew they were coming out strong in the second period and we got put on our heels a little bit. We found a way to get our momentum back in the third.”

Duchene scored at 17:00 of the third period to make it 4-3 with a wrist shot from low in the right circle before Jean-Gabriel Pageau extended the lead to 5-3 at 18:15.

Duchene’s goal came less than three minutes after Anderson stopped Aleksander Barkov on a breakaway to keep the game tied 3-3.

“It was huge,” Senators coach Guy Boucher said. “It’s one of those game-changers. That’s what good goaltenders do.”

Duchene beat Luongo glove side with a wrist shot 57 seconds into the first period to make it 1-0. Paajarvi made it 2-0 at 15:16 with a deflection off Fredrik Claesson’s wrist shot.

Evgenii Dadonov, who celebrated his 29th birthday Monday, made it 2-1 at 12:36 of the second period with a wrist shot from the left circle. Mike Matheson tied it 2-2 at 17:28, beating Anderson glove side with a shot off a pass from Vincent Trocheck.

“I’d love to comment on the second period, but I wouldn’t have appropriate words for television,” Boucher said. “We reloaded in the third period.”

Paajarvi scored to give Ottawa a 3-2 lead 43 seconds into the third period.

Huberdeau tied it at 3-3 at 4:23 when Trocheck’s centering pass redirected in off his skate.

“The whole first period obviously didn’t go our way, but we found a way to battle back,” Panthers defenseman Keith Yandle said. “We’ve been doing that all year. We let off the gas a little bit in the third and they got the one that they needed. Anderson played really well for them and made a lot of big saves for them.”

Goal of the game
Duchene’s goal at 17:00 of the third period.

Save of the game
Anderson’s save on Barkov at 14:10 of the third period.

Highlight of the game
Duchene’s goal 57 seconds into the first period.

They said it
“They had momentum pretty much the whole (second) period. It’s a credit to us coming in here and just taking a deep breath and refocusing for the third because it could have gone sideways real quick there, but we came out flying and made sure that we got the lead.” — Senators goaltender Craig Anderson

“We just didn’t get the start that we wanted. We let a team hang around and sooner or later something like that is going to happen.” — Panthers captain Derek MacKenzie

Need to know
Senators forward Mark Stone, who leads the team with 62 points, missed the game because of a leg injury. Boucher said he is week-to-week. … Anderson hosted members of the Marjory Stoneman Douglas High School hockey team and presented them with Senators jerseys before the game. Anderson lives in Parkland, Florida in the offseason. … Yandle played in his 700th consecutive game, the longest active streak in the NHL. … Panthers forward Denis Malgin played 14:23 after missing the past seven games with an ankle injury.