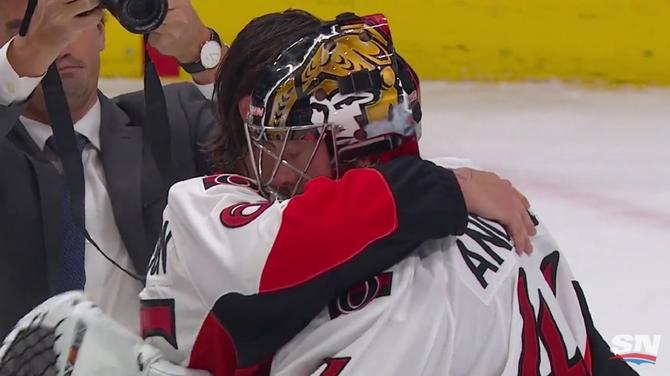 Sens swarm Anderson after SO

Anderson stopped all 59 shots he faced to post a 2-0-0 record and guide the Senators (5-3-0, 10 points) to third place in the Atlantic Division. He made 22 saves in a 3-0 victory over the Vancouver Canucks Oct. 25. Anderson then took a leave of absence following the cancer diagnosis of his wife, Nicholle, but returned with a 37-save shutout in a 2-0 triumph over the Edmonton Oilers Oct. 30. The 35-year-old Park Ridge, Ill., native has earned consecutive shutouts for the third time in his career – and first time in nearly a year (Nov. 19-21, 2015). He owns a 5-1-0 record with a 2.46 goals-against average, .921 save percentage and two shutouts in six appearances this season.

EDMONTON — Ottawa Senators goalie Craig Anderson made 37 saves, including 18 in the third period, in a 2-0 win against the Edmonton Oilers at Rogers Place on Sunday.

It was Anderson’s first game back since taking a leave of absence Thursday to be with his wife, Nicholle, who was recently diagnosed with cancer.

Anderson rejoined the Senators on Saturday for the last game of a three-game Western Canada road trip after goaltender Andrew Hammond sustained a lower-body injury in a 5-2 loss at the Calgary Flames on Friday.

“I think you couldn’t really feel it, the gravity that it was, until the final whistle when the game was over,” Senators captain Erik Karlsson said. “We accomplished a great game led by [Anderson]. He came here [Saturday] and we all knew about it, and obviously, he held a strong face, but you could still see the pain in his eyes. He came in and really led by example, he didn’t say much, he did the same thing, the same routine and he showed what a true leader was.”

The shutout was Anderson’s second of the season and 35th of his career. He made 22 saves in a 3-0 win at the Vancouver Canucks on Tuesday. Anderson has five shutouts in 17 games against the Oilers. He has not allowed a goal in 121 minutes and 57 seconds.

Anderson did not speak with the media after the game.

Mike Hoffman scored his first goal of the season for Ottawa (5-3-0). Bobby Ryan sealed the win with an empty-net goal with 32.2 seconds remaining.

“It’s a pretty emotional night with everything that’s been going on with this group,” Hoffman said. “Coming in here and facing one of the best teams in the League at the moment was a big task for us. Everyone in here was ready to take them on and we played a solid game, and obviously, [Anderson] coming back and helping this team out is a pretty cool story.”

Hoffman scored at 12:18 of the second period to give Ottawa a 1-0 lead. Hoffman came close to scoring again on a power play with 6:16 remaining in the period when he took a pass at the point and one-timed a shot that sailed past Talbot, but hit the goal post.

“We expected that from that team, they’re proud players and are going to play that way for a teammate,” Oilers coach Todd McLellan said. “He had an exceptional night. I didn’t think we made it real hard from him in and around the paint. He was able to see the puck and able to not give up many secondary chances and that has a lot to do with their team, but also a little bit to do with ours, so that’s something we have to clean up.“

Kyle Turris sent the puck to Tom Pyatt behind the net, who fought off Leon Draisaitl and made a behind-the-back pass to Hoffman in front. Hoffman shot the puck past Talbot to give Ottawa a 1-0 lead at 12:18 of the second period. “I bumped off my post a little too early and gave him the short side,” Talbot said. “I wanted that one back, to be honest.”

Connor McDavid sent a pass out from behind the net to Jordan Eberle, whose shot was stopped by Anderson with 11:25 remaining.

Ryan Nugent-Hopkins won a battle for the puck along the boards at 4:20 of the second period and went in on goal. Marc Methot was able to catch Nugent-Hopkins from behind and disrupt his shot, allowing Anderson to make a save.

“We had trouble around our blue line turning pucks over. They play a different system that we knew was there, we just couldn’t get around it.” — Oilers forward Jordan Eberle

“We’re going to lose some games in an 82-game season. You can’t expect to win each and every night. I thought we played well defensively and when we didn’t, [Talbot] was a rock back there. We played a good game, they just got the upper hand tonight.” — Oilers captain Connor McDavid

“We play a great game. We get paid a lot of money, and we have a lot of people who depend on us. At the end of the day, it’s just a sport. Life is much bigger. It makes you take a step back.” — Senators captain Erik Karlsson