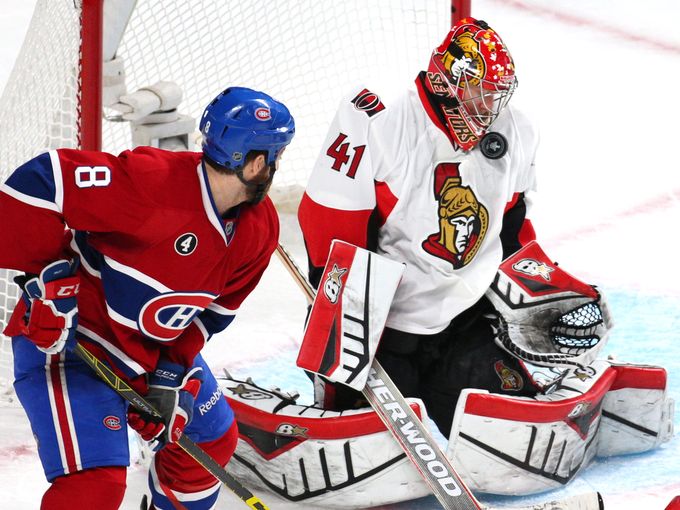 Recap:
OTTAWA — Brendan Gallagher knew the Montreal Canadiens were going to get a special performance from goaltender Carey Price as soon as he saw Price in the dressing room before Game 6 of their Eastern Conference First Round series against the Ottawa Senators on Sunday night.

Price made 43 saves to help the Canadiens to a 2-0 victory at Canadian Tire Centre, eliminating the Senators from the Stanley Cup Playoffs.

“You could just see him before the game, the look he had, the focus that he had, he was going to put in a good performance,” said Gallagher, who opened the scoring at 13:26 of the first period. “Forty-three saves. That’s pretty impressive, road building in an elimination game. You come to expect it, but you can’t take it for granted. It’s pretty impressive what he did.”

Montreal will face the winner of the first-round series between the Tampa Bay Lightning and Detroit Red Wings in the second round. Detroit, which leads the series 3-2, hosts Game 6 on Monday (7 p.m. ET; CNBC, CBC, TVA Sports, FS-F, FS-D).

Price, a finalist for the Vezina Trophy, bounced back from a 5-1 loss in Game 5.

“The team wanted this one,” Price said. “When you’re up 3-0 in a series, you want to close it out. They’re a good hockey team. They pushed us; they played well those past few games. [Goalie Craig] Anderson played extremely well; even tonight he played real well. We just found a way to will one out.”

Anderson, who made 18 saves Sunday, was instrumental in Ottawa’s attempt to rally from a 3-0 series deficit, making saves on 73 of 74 shots he faced in Games 4 and 5.

But the Canadiens ended the Senators’ season of comebacks in Game 6.

Ottawa was 14 points out of the final postseason position in the Eastern Conference in February, but finished the season 23-4-4 to earn the first wild card into the playoffs.

“This team has been a real treat to say you’ve been the head coach of them,” said Senators coach Dave Cameron, who replaced Paul MacLean on Dec. 8. “I’m extremely proud of this group … after the disappointment of (the loss) is digested, it’s always a lot easier as a coach when your team has emptied its tank, and that team emptied its tank for me for three months.”

Price made a big save on Senators forward Kyle Turris with 4:32 to go in the first period and was at his best in the final minutes as the Canadiens killed a tripping penalty to Jacob De La Rose.

Ottawa had nine shots in the last three minutes of the game, but Price made saves on the Senators’ best chances from Turris and center Mika Zibanejad.

“That’s what it’s all about,” Price said of the final minutes. “That’s what makes it so much fun. Ever since you’re a little kid, you dream of being in these types of situations, and tonight we found a way to succeed.

“Tonight we had a group of guys that were willing to do whatever it takes to win and we did.”

Canadiens forward Max Pacioretty, who scored an empty-net goal with less than one second left in the third, is happy Price was on his side considering the effort from the Senators in Game 6.

“Carey was the best player in the building,” he said. “That’s the story very often with our team. He was the difference tonight. But I give that team a ton of credit because they definitely battled hard and played the right way, and their future looks good.”

The Senators can’t believe their run is over.

“Right now it’s very, very empty,” Senators captain Erik Karlsson said. “We’ve been playing so hard for the past few months here that I don’t think we really expected it to end this fast.

“For our team, for what we have in here, I think we had a great season. I think we should be happy where we are. Looking back, we shouldn’t really be in the playoffs to begin with. The run we made was unbelievable, and it was a lot of fun and everybody grew enormously from that.

“That’s what we’ve got to carry on going into next season. We know we’re a better team now.”

The Canadiens scored the first goal of the game for the first time in the series, and Price made it stand up.

It looked like the Senators had tied the game at 6:55 of the second period when forward Jean-Gabriel Pageau knocked in a loose puck, but the play had been blown dead. The puck trickled away from Price after he stopped a shot by Ottawa defenseman Mark Borowiecki.

“Both teams talked over the course of the series, sometimes the only difference in the game is puck luck, and I think the referee just had bad puck luck,” Cameron said.