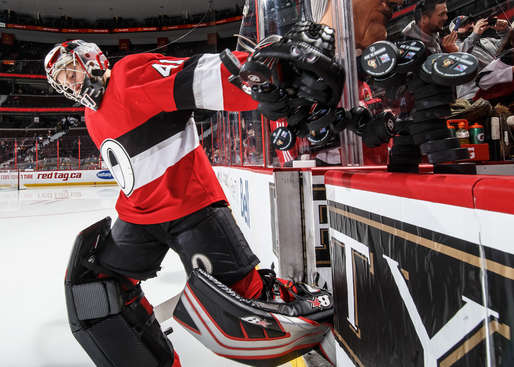 OTTAWA — Craig Anderson made 27 saves for the Ottawa Senators in a 3-0 win against the New York Rangers at Canadian Tire Centre on Thursday.

Anderson ended a personal four-game losing streak and got his first shutout of the season.

“[Anderson’s] seen more rubber than the Michelin Man this year,” Senators forward Matt Duchene said. “He deserved that one, for sure. He looked really sharp right off the bat. You could tell he was feeling it tonight.”

Drake Batherson and Duchene each had a goal and an assist, and Magnus Paajarvi scored for Ottawa (11-12-3), which has won two straight.

“This was one of the few games that we’ve actually come together for a full 60 minutes,” Anderson said. “We’ve had spurts of games where we show what we can do, offensively and defensively, and tonight was a full 60 minutes. It was just outstanding to be back there for the guys.”

“I felt like [Ottawa] deserved the win tonight,” Lundqvist said. “Sometimes you feel like, yeah, you have a lot of pucks against this team, but they play smart, they play really hard and you’ve got to give them credit, too. They moved the puck really well offensively. It was a hard game to play.”

Batherson redirected a cross-crease pass from Duchene to give the Senators a 1-0 lead at 2:06 of the first period. Paajarvi beat Lundqvist blocker side with a wrist shot at 14:35 to make it 2-0.

“When things didn’t go well, we made them worse,” Rangers coach David Quinn said. “Obviously, during the course of a game, there’s going to be some stretches where you don’t play well, and you hope to make them better. You hope to stop it and recover and be mentally tough enough to kind of get your wits about you and regroup. We just never did it. We just got worse and worse and worse as the game went on.”

Duchene scored on a one-timer into an open net off a cross-ice pass from Batherson to extend the lead to 3-0 at 17:00 of the second period. Ryan Dzingel had an assist on the play for his 100th NHL point.

“I didn’t even want to put my hands up because it was an absolute gift from [Batherson],” Duchene said. “He’s shown, since he’s been up here, what kind of player he is already and is going to be, so I’m pretty lucky to play with him.”

They said it
“I feel like it’s not just one game. It’s starting to become a road thing, and that’s something we need to adjust and correct real quick. I think we’ve been playing really well at home (10-4-0). On the road, we need to do the little things really well for us to win games, to be in games, to create chances. Sometimes, you might not think that little thing matters, but it makes such a big difference. … That’s just mental. And mental, it’s about preparation. It’s about preparing yourself and being ready, understanding the importance of every play. It’s not technical at all. You might have a certain way to prepare yourself at home, but on the road, you’ve got to do whatever you’ve got to do to be in the same mindset.” — Rangers goalie Henrik Lundqvist on New York’s 3-7-2 road record

“[Paajarvi] blocks a shot with 30 seconds left, and he doesn’t have to do that, but he’s showing that he’s paying the price. We had guys all up and down the lineup tonight paying attention to details and the little things that make a big difference.” — Senators goalie Craig Anderson

Need to know
Rangers defenseman Kevin Shattenkirk did not take a shift in the third period. Quinn said the reason for sitting Shattenkirk would stay between coach and player. … Ottawa is 8-0-0 in its past eight home games (Stanley Cup Playoffs included) against New York.