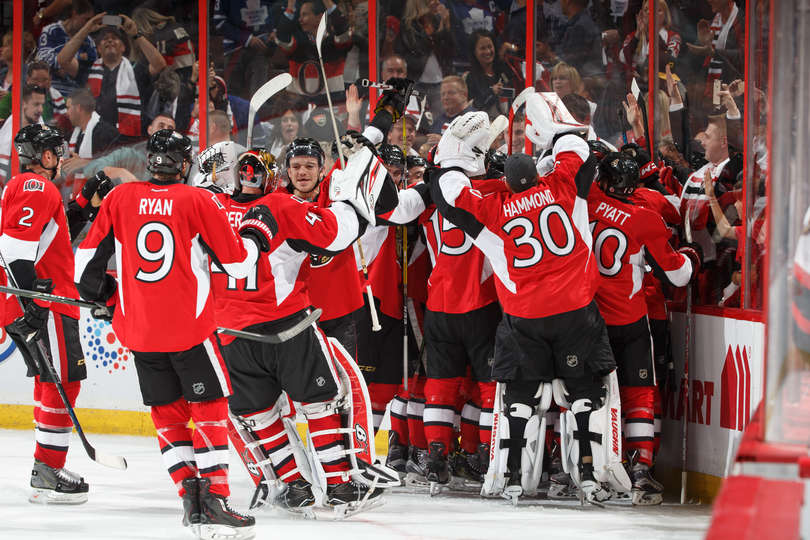 OTTAWA — Forward Auston Matthews became the first player in the modern era to score four goals in his first NHL game when the Toronto Maple Leafs lost to the Ottawa Senators 5-4 in overtime at Canadian Tire Centre on Wednesday.

Kyle Turris scored his second goal 37 seconds into overtime to give the Senators the victory in the season opener.

Matthews, the No. 1 pick in the 2016 NHL Draft, made history when he scored his fourth goal of the game with three seconds left in the second period. Four players since the 1943-44 season scored three goals in his NHL debut: Alex Smart (Montreal Canadiens, 1943), Real Cloutier (Quebec Nordiques, 1979), Fabian Brunnstrom (Dallas Stars, 2008) and Derek Stepan (New York Rangers, 2010). Joe Malone and Harry Hyland each scored five goals in his NHL debut in 1917.

“I’m just speechless, honestly,” Matthews said. “As the periods kept going by you’re kind of thinking to yourself you can’t really believe this is going on, it’s that surreal. There was some good and some bad and we learn from it and continue to move forward.”

Matthews, who was up against Turris in overtime, accepted responsibility for the loss.

“More of an ideal start to your season individually, I guess, but that last play was 100 percent my fault,” Matthews said. “We came here to win and we didn’t get that done, so just a good learning point for myself and the team and we’ll be ready Saturday.”

Frederik Andersen made 25 saves in his debut for the Maple Leafs. Craig Anderson made 34 saves for the Senators.

Matthews scored on his first shot on goal at 8:21 of the first period to give the Maple Leafs a 1-0 lead, taking a pass from Zach Hyman from behind the net and beating Anderson.

Matthews tied the game 2-2 at 14:18 of the first when he jumped around Senators defenseman Erik Karlsson along the left-wing boards, went to the net and put a low shot from a sharp angle by Anderson.

Matthews put the Maple Leafs ahead 3-2 at 1:25 of the second period on his third shot of the game when he took a pass from defenseman Morgan Rielly in the right-wing circle and put a low shot in the net on the glove side.

Matthews gave the Maple Leafs a 4-3 lead with three seconds left in the second period.

Turris tied the game 4-4 at 6:45 of the third period when his shot from the right-wing circle went in over Andersen’s left shoulder. Karlsson, Bobby Ryan and Derick Brassard, playing his first game for the Senators after being acquired in a trade with the Rangers in July, scored for the Senators.

Maple Leafs coach Mike Babcock said he was impressed not only with Matthews but with the play of another rookie, forward Mitch Marner.

“We were all part of history tonight because we’re here,” Babcock said. “[Matthews], a special player, I thought just for me, from my perspective, since I’ve been the [Maple] Leafs coach that’s the best night I’ve had since I’ve been here by 10 miles, not even close because now we have an opportunity when you look at Marner.

Matthews skated down the left wing, got by Karlsson along the boards and drove hard to the net along the goal line. His low, hard shot went into the net just inside the far post for his second goal of the game and tied it 2-2.

Matthews’ second goal of the 1st

Matthews’ low shot from the inside edge of the right-wing circle went in low on the glove side to complete his hat trick 21:25 into his NHL career. The Maple Leafs fans at Canadian Tire Centre threw hats on the ice.

“I emphasized that I’m going to try and win this draw, so he couldn’t get No. 5.” — Senators center Kyle Turris on taking the faceoff in overtime against Auston Matthews

“Not good enough, but he’d be the first to tell you that. That might be the most comfortable position on our team if you’re me. I’m not going to spend any time worrying about that. He’ll get himself going. He missed quite a bit of hockey. I don’t have any concerns about him.” — Maple Leafs coach Mike Babcock on goaltender Frederik Andersen

“I don’t think there was a lack of effort. In the first period, we saw a lot of the things we don’t want to see, which is normal. We haven’t had a lot of practices. I’m certainly not expecting things to turn around 180 degrees (right away). We know there’s a process and it’s going to take time. I really like how we were in the third period, compared to the other two periods. It was all about defending hard and being patient with the result, although we were aggressive with our actions.” — Senators coach Guy Boucher

“It’s going to do a lot for his confidence, that’s for sure. He’s a very good player. Physically, he’s a man at 19 years old. So he’s physically ready for the game. Obviously he’s mentally there too. He’s going to have a long career. Don’t wish him too much luck with the Leafs.” — Senators center Kyle Turris on Auston Matthews

Matthews on his debut

Zack Smith led the Senators in the faceoff circle among players taking more than two faceoffs. He won six of seven (86 percent). … Toronto defenseman Morgan Rielly led the Maple Leafs in ice time at 25:45. … Senators defenseman Erik Karlsson skated a game-high 27:36, had a goal and two assists, was plus-3 and had eight shots. He also blocked three shots. … Brassard had a goal and an assist in his debut for the Senators. … Maple Leafs defenseman Matt Hunwick left in the first period and did not return. He played 2:11.