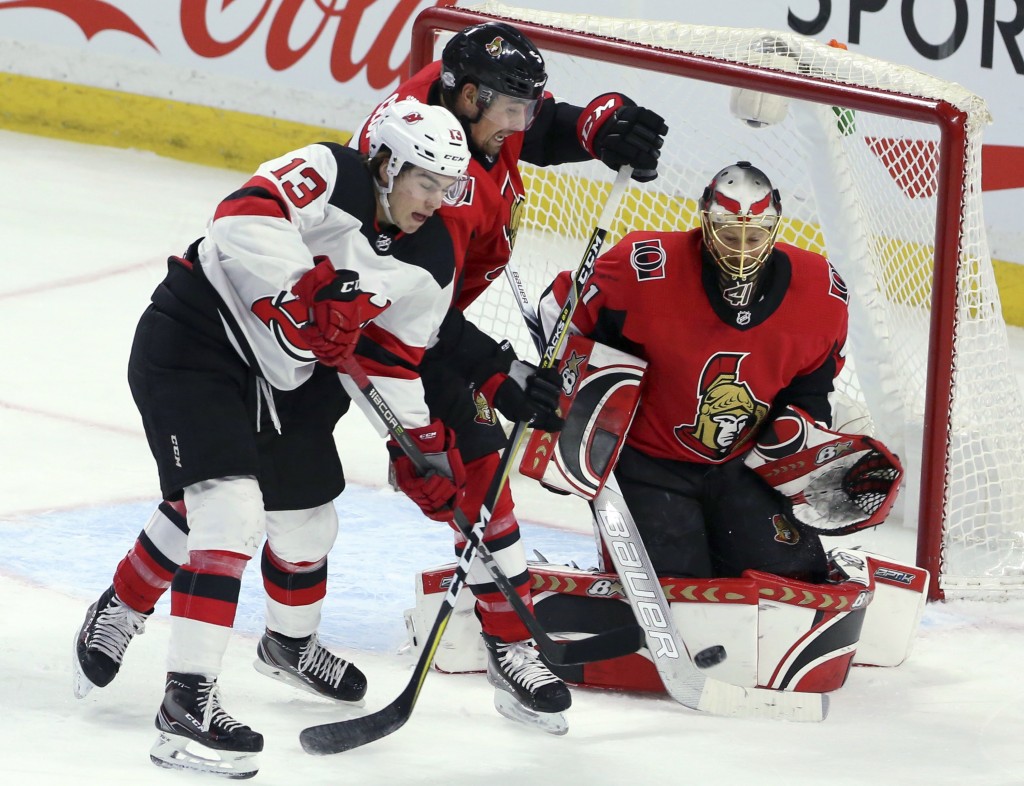 NHL.com Recap
OTTAWA — Matt Duchene had a goal and two assists for the Ottawa Senators in a 5-3 win against the New Jersey Devils at Canadian Tire Centre on Tuesday.

“When the pucks start going in, the confidence starts coming,” said Duchene, who has 14 points (six goals, eight assists) in his past 14 games. “I felt like when I first got here there was about 10 or 15 games, and out of those games there were probably 12 of them where we just couldn’t get started.

“The process was there but the results weren’t. I got away from it at times and then you circle back to it and just try and come out every night and just do the right things, and it eventually goes.”

Mike Hoffman had a goal and an assist, and Craig Anderson made 30 saves for the Senators (18-25-9), who have won three of four games.

Keith Kinkaid allowed four goals on 20 shots and was pulled in the second period. Eddie Lack made 11 saves in his debut for the Devils (27-17-8), who had won three in a row.

“Four was enough,” New Jersey coach John Hynes. “I thought [Lack] went in and he made some good stops. We give up a breakaway goal that he had to stop, which isn’t fair to him, but I thought he came in and made some good saves and made another nice glove save in the third period. So, nice to see him get in and get his feet wet and get back to some NHL play.”

Thomas Chabot passed to Colin White in the slot on a rush and he scored his first NHL goal to give the Senators a 4-1 lead at 8:43 of the second period.

“It was a great play from Chabot and Duchene there,” said White, who played his 13th NHL game. “It’s funny, we were shooting pucks today as a game after the pregame skate, all three of us, and then that happens, so it’s pretty exciting.”

“Sometimes we’ve had issues dealing with momentum changes throughout games,” Hall said. “And sometimes we need to be better at that because it’s not always going to go perfect for us the rest of the way.”

After stepping out of the penalty box, Zack Smith accepted a pass from Jean-Gabriel Pageau and scored on a breakaway at 19:12 to make it 5-2.

“It’s almost like you feel like you don’t deserve it,” Smith said. “It wasn’t a good penalty, by any means. It’s a stick penalty (hooking) 200 feet from our net. I jumped out of the box and I looked like an anime character with the size of my eyes. I don’t get too many breakaways, it seems like this year anyways, so I wanted to make sure I capitalized on that one.”

Travis Zajac gave New Jersey a 1-0 lead with a snap shot at 1:57 of the first period.

Hoffman one-timed a pass from Duchene on the power play at 13:35 first to tie it 1-1, and Christopher DiDomenico gave the Senators a 2-1 lead at 14:33 when his shot deflected off Devils defenseman Sami Vatanen.

Goal of the game
White’s goal at 8:43 of the second period.

Save of the game
Anderson’s save against Travis Zajac at 8:07 of the third period.

Highlight of the game
Duchene’s goal at 18:58 of the first period.

They said it
“I think it’s another lesson for our team that we weren’t engaged in the game. We weren’t emotionally attached to the game to start, and it was something that we had talked about, but we didn’t find a way as a group to be ready to play at the emotional and intensity level you need to be at to be a good team.” — Devils coach John Hynes

“His forecheck is outstanding. That’s first and foremost the best thing he does. And when I say that, I don’t mean, like, he just goes in and hits and gets on the forecheck. He goes in, he steals pucks, he creates battles and he makes it easy as F2 (forward two) to come in, and if I’m F1, he comes in and grabs it just as well. He does a lot of really good things out there.” — Senators forward Matt Duchene on Colin White

Need to know
Hall has 16 points (seven goals, nine assists) in an 11-game point streak. … Alexandre Burrows got his second point in 30 games with an assist on Smith’s goal. Burrows has five assists in 51 games.