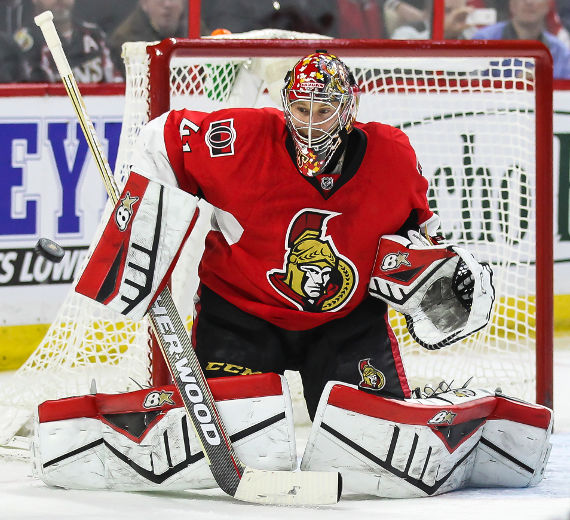 OTTAWA — Rookie Mike Hoffman scored twice to help the Ottawa Senators to a 6-2 win against the NHL-leading Anaheim Ducks at Canadian Tire Centre on Friday.

The Senators won two games in a row for the first time since Nov. 4-6 and are 3-1-1 under coach Dave Cameron, who replaced Paul MacLean on Dec. 8.

It was the first time this season the Senators (14-12-6) scored six goals in a game.

“It feels like it was a long time ago (since we had a winning streak), but it feels nice right now,” Hoffman said. “We’re playing pretty solid hockey right now. Hopefully we can keep the consistency moving forward.

“Our goalies are playing well, we’re starting to put the puck in the net, so those are the biggest things in hockey. If we can keep that going, there’s a good chance (we can keep this going), for sure.”

Ducks goaltender Ilya Bryzgalov, starting his first game after signing as a free agent Dec. 9, made 25 saves. Frederik Andersen started the previous 20 games for Anaheim (22-8-5), which lost for the second time in three games after winning seven in a row.

“I don’t know what to say. This was not exactly how you imagine your return. It was a bad night,” Bryzgalov said, who wouldn’t use rust as an excuse.

Ducks coach Bruce Boudreau wasn’t happy with Bryzgalov’s performance nor that of his teammates, and wasn’t using back-to-back games or the road trip as excuses.

“I think it’s a tough spot, but Freddy played 20 games in a row. It’s not like Bryz is a first-year player,” Boudreau said. “He knows what he’s done. He’s been practicing for two weeks, he’s played two games in the minors, he played more than a period-and-a-bit in Toronto (on Tuesday in a 6-2 loss). I mean, he’s practiced. He should have been ready and he should be ready.

“I know we’ve been on the road for 13 of the last 15 days, but that doesn’t hold anything. We set our bars pretty high on our team and when you don’t reach what you’re trying to reach for, you get upset.”

The Ducks played the second of back-to-back games and finished a five-game road trip 3-2-0.

Ducks captain Ryan Getzlaf scored two goals 2:33 apart late in the second period and early in the third to cut the Ottawa lead to 4-2. He said the Ducks didn’t give Bryzgalov, playing his second game since May 13, much help.

“Our group would have liked to have played better in front of him. You’re talking about a goalie coming off however long he’s been out,” Getzlaf said. “That’s not easy to play in any situation let alone when your team’s not really playing in front of you. I felt bad that we kind of let him down tonight.”

The Senators, coming off a road trip when they earned five of six points, jumped on the Ducks quickly and opened a 4-0 lead. There was a power-play goal by Milan Michalek, an even-strength goal by Mark Stone, and then two goals in 41 seconds, a shorthanded goal by Kyle Turris, and Hoffman’s first late in the second period.

“I thought we had real good energy, a real good start,” Cameron said. “We knew that team played last night and we wanted to get them back on their heels if we could. I thought we did.”

Hoffman’s second goal of the game at 5:40 of the third period thwarted the Ducks’ push.

Getzlaf made it 4-1 and broke the shutout streak of Senators goaltender Craig Anderson at 115:14 with 44 seconds left in the second period.

Getzlaf made it 4-2 1:49 into the third period when he skated through the neutral zone, went around MacArthur, and then forced his way by the stick check of Senators defenseman Eric Gryba to cut to the Ottawa net. Getzlaf forced the puck by Anderson for his 12th goal of the season.

Hoffman charged up the slot and put a pass by Bobby Ryan by Bryzgalov to make it 5-2, and Mika Zibanejad scored his ninth of the season at 16:32.

“We didn’t have a lot [of energy] there,” Getzlaf said. “It’s hard to say anything was there. When we got out there we were missing passes. We were not crisp. We weren’t forechecking and the list goes on. They outplayed us in that first period-and-a-half at least and throughout most of the game. They played well. I’m not taking anything away from them and what they did. They played fast and they executed their system.”

The Ducks return home and play the San Jose Sharks on Monday.

Ducks forward Dany Heatley, coming off a groin injury, played his first game since Nov. 9. He was traded by the Senators at his request in 2009 and was booed each time he touched the puck Friday.

Boudreau made forward Devante Smith-Pelly a healthy scratch to put Heatley in the lineup.

Ducks defenseman Hampus Lindholm took the warm-up but missed the game. Boudreau said he was day-to-day.

The Senators are on the road for games against the Canadiens on Saturday and the Washington Capitals on Monday.