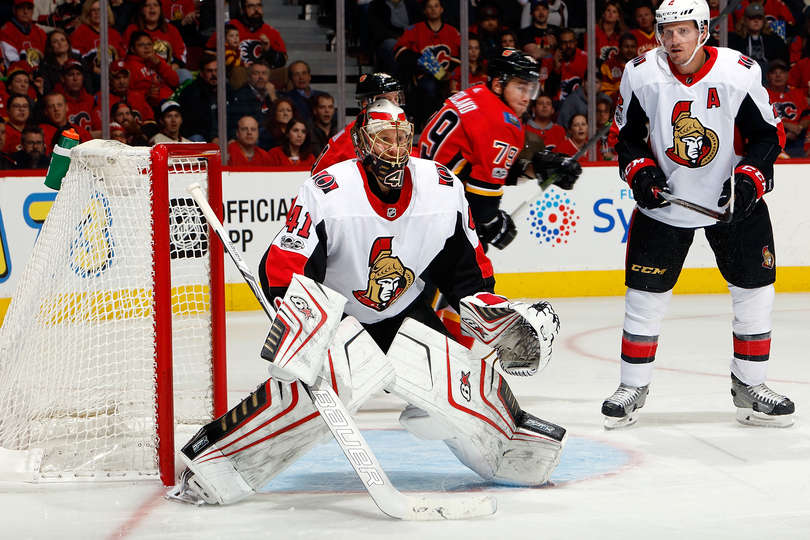 CALGARY — Craig Anderson made 25 saves, and Cody Ceci and Mark Stone each had a goal and an assist to help the Ottawa Senators to a 6-0 win against the Calgary Flames at Scotiabank Saddledome on Friday.

Kyle Turris had three assists, and Derick Brassard, Mike Hoffman, Ryan Dzingel and Chris Wideman also scored for Ottawa (2-0-2), who have opened the season on a four-game point streak.

“There’s always going to be mistakes but that’s where you look at the video and see if you can learn from that,” Anderson said. “I think we’re doing a great job of learning from our mistakes the first three games and we put together a pretty solid 60 minutes tonight.”

The shutout is Anderson’s first of the season and 39th of his NHL career. He has a 1.65 goals-against average and .937 save percentage through four starts.

“He’s never panicked, reads the play so well,” Ceci said of Anderson. “It’s great to have him back there. He bails us out a ton of times. Some games when we don’t have it, we give up a bunch of shots and he’s always back there and always stays calm.”

Mike Smith made 17 saves for the Flames (3-2-0), who ended a three-game winning streak. Calgary has been shutout in each of its two losses this season; the Flames lost 3-0 at the Edmonton Oilers on Oct. 4 in the season opener. Jaromir Jagr played his first game in Calgary for the Flames after signing a one-year contract on Oct. 4.

“You always want to win at home,” Smith said. “It’s disappointing to come home after a good road trip and go down like that, but we’ll learn from it and move on.”

Ceci scored with 45 seconds remaining in the first period to put Ottawa up 1-0, and Brassard made it 2-0 at 18:43 of the second when he shot by Smith’s glove from the point.

Hoffman scored on the power play 1:08 into the third period to make it 3-0. Ottawa was 0-for-20 on the power play to start the season prior to the goal, which came with Jagr in the penalty box for hooking. The Senators were 2-for-7 with the man-advantage Friday.

“I thought our power play generated momentum for us and we were able to get a couple goals there and I think that was the key for us tonight,” Anderson said. “If we don’t get those power plays and make good on them, I don’t think we get the momentum that we had.”

Stone made it 4-0 at 5:18, and Dzingel finished a three-way passing play by lifting a shot over Smith’s shoulder at 7:29 to put the Senators up 5-0. Eddie Lack relieved Smith after the goal.

Wideman scored on the power play to give Ottawa a 6-0 lead with 3:37 remaining.

“In the third they just kept coming,” Flames captain Mark Giordano said. “I know the game’s 3, 4-0, but we took some unnecessary risks and they’re a good team. They made us pay for it.”

Ceci took a pass from Tom Pyatt off the rush and slipped a backhand between Smith’s legs for his second goal of the season.

“[Alexandre] Burrows made a great play to not dump it in. He passed it underneath to Pyatt cutting through and Pyatt made a great pass to me,” Ceci said. “It was a good play. We’ve been working on those little chip passes in practice a lot lately and it paid off tonight.”

Michael Frolik found Matthew Tkachuk behind Ottawa’s defense, but Anderson made a pad save on Tkachuk’s backhand to keep the Senators up 3-0 at 3:08 of the third period.

Off a faceoff win by Turris, Hoffman one-timed a return pass from Thomas Chabot over Smith’s glove for his first goal of the season.

“This is a tough building to come into and they come out hard. We just had the weather the storm. We were able to be there when our momentum started to switch. That’s what I was focused on, next shot, get a whistle, because they were flying there at the start.” — Senators goaltender Craig Anderson

“They’re a transition team, that’s what they are. They sit back in the neutral zone and wait for you to make a mistake and counter punch. They did a good job of it, especially when they’re up. That’s why against them I feel like the first goal is important.” — Flames defenseman Mark Giordano

Jagr had four shots in 13:27 of ice time. … Senators defenseman Erik Karlsson, who is recovering from foot surgery on June 14, missed his fourth straight game to start the season. Ottawa defenseman Johnny Oduya (lower body) also missed a third straight game, but is expected to play at the Edmonton Oilers on Saturday. The Senators remained perfect on the penalty kill (12-for-12).