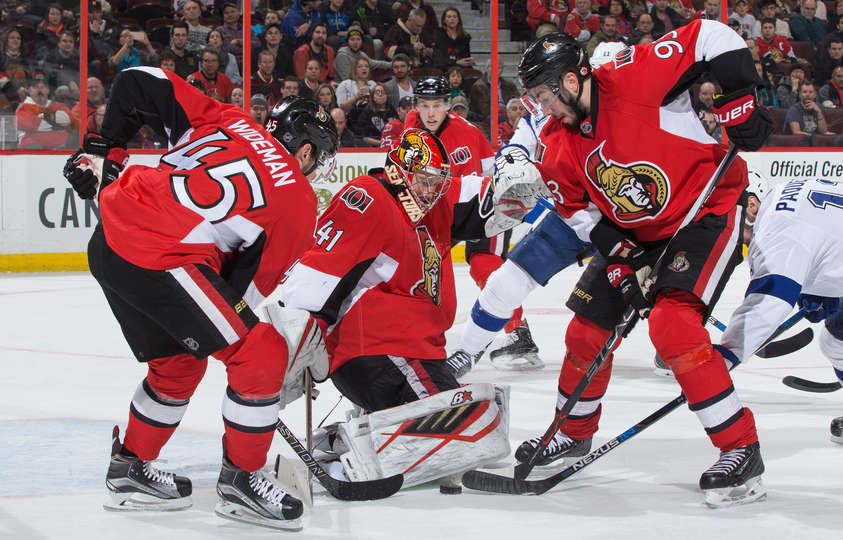 OTTAWA — Mark Stone continued his hot streak with two goals and an assist in the Ottawa Senators’ 5-1 win against the Tampa Bay Lightning at Canadian Tire Centre on Monday.

Stone, playing on a line with left wing Zack Smith and center Jean-Gabriel Pageau, has five goals and three assists in the past four games for the Senators (25-23-6), who have won two straight for the third time since Dec. 1.

Stone, who scored one goal in 14 games before his hot streak started, said he’s relieved the points are piling up.

“I knew for our team to have success, our line needed to get going, for sure,” Stone said. “We can’t just rely on Bobby [Ryan], Mika [Zibanejad] and [Mike Hoffman] for the rest of the year. We knew we needed to amp up our game to kind of help them out. It’s clearly led into some team success.”

Pageau had a goal and two assists Monday, and Smith opened the scoring in the first period. The line has nine goals and 11 assists in the past four games.

Ottawa forward Shane Prince scored his third goal of the season, and Craig Anderson made 31 saves.

Pageau scored into an empty net after Tampa Bay coach Jon Cooper pulled goaltender Andrei Vasilevskiy with 8:36 left in the third period and the Lightning down 4-1.

J.T. Brown scored his sixth goal of the season and third in five games for the Lightning (29-19-4), who lost for the second time in 12 games. Vasilevskiy made 24 saves.

Ottawa coach Dave Cameron said Stone has been letting the game come to him lately.

“Mark’s such a smart player; he sees the game, he has a high hockey IQ,” he said. “The big difference now is he’s not forcing the play, he’s making a real solid play. I thought maybe a little earlier on he was trying to force things, to make something offensive happen every time. This league is too good for that. Now, he’s doing a much better job of managing the puck and getting rewarded for it.”

The Senators were in control from the opening faceoff against the Lightning, who were 15-5-1 since Dec. 12.

“Eighty-two games. I think we all watched it,” Tampa Bay coach Jon Cooper said. “We’ve been on a pretty good run here, the last, I don’t know, month and a half, two months, and it came to a crashing halt tonight. That’s it.

“It’s 82 games. You’re not going to Picasso every single one, but a lot of the things that we do as a team, that’s kind of our trademark, first and foremost our work ethic, our speed, our tenacity, our being dangerous out there on the ice, you can throw a big goose egg up for all those.”

Ottawa’s penalty-killing, 30th in the NHL (74.6 percent), is showing signs of improvement. After going 4-for-4 against the Toronto Maple Leafs on Saturday, the Senators killed all three Lightning power-play opportunities.

Stone helped give Ottawa a 4-1 lead with two goals in the second period.

Some nice passing on the power play resulted in Zibanejad getting a wrist shot on net. Pageau, jostling for position in front, kicked the rebound to Stone, who knocked the puck past Vasilevskiy at 4:41.

Stone scored his 16th goal at 10:46 with the teams playing 4-on-4. He curled at the blue line to give himself a little space, and then scored on the blocker side with Pageau cutting in front of the net.

Ottawa led 2-1 after the first period on goals by Smith and Prince.

The Senators, who are four points out of the second wild card into the Stanley Cup Playoffs from the Eastern Conference, have won three games in row once this season, part of a four-game winning streak Nov. 19-25. They’ll have a chance to do it a second time when they visit the Detroit Red Wings on Wednesday.

“Now we’re at the point in your schedule and the season where there’s no margin for error here. We have to get on a roll,” Cameron said. “So this is a great way to start it. It starts with confidence. Now it comes down to the old catch-22. Continue to play the right way and your confidence will be great. If you let your foot off the pedal and get back on your heels, you put your confidence in jeopardy again because your play will be in jeopardy. It’s just a matter of sticking to it now.”

The Lightning play at the Montreal Canadiens on Tuesday.

“This has to be a page-turner here, because now we’ve got Montreal [which has] won a couple here and feeling good about themselves, and we’re not,” Cooper said. “That’s how this league is. You’re not always encouraged playing back-to-backs, but I’m glad we get to jump right back at it tomorrow night.”

“We didn’t compete hard enough. We didn’t work hard enough,” said Stamkos, who was held without a shot for the fifth time this season. “We’ve been playing very well as of late. It started with a game a couple of weeks ago where we decided we needed to compete harder and work harder, then let the skill and speed take over.

“Tonight was one of those games we haven’t had in a while, but they just outworked us. They did everything better than us, especially at the start of the game. You get in a hole, it’s tough to come back. We have a chance to bounce back tomorrow night and we’re looking forward to that.”

Defenseman Jason Garrison left the game after the first period with a lower-body injury. He will not play against the Canadiens, Cooper said.

Defenseman Matthew Carle was a scratch Monday. Cooper said Tampa Bay might call up a defenseman from Syracuse of the American Hockey League for the game in Montreal.